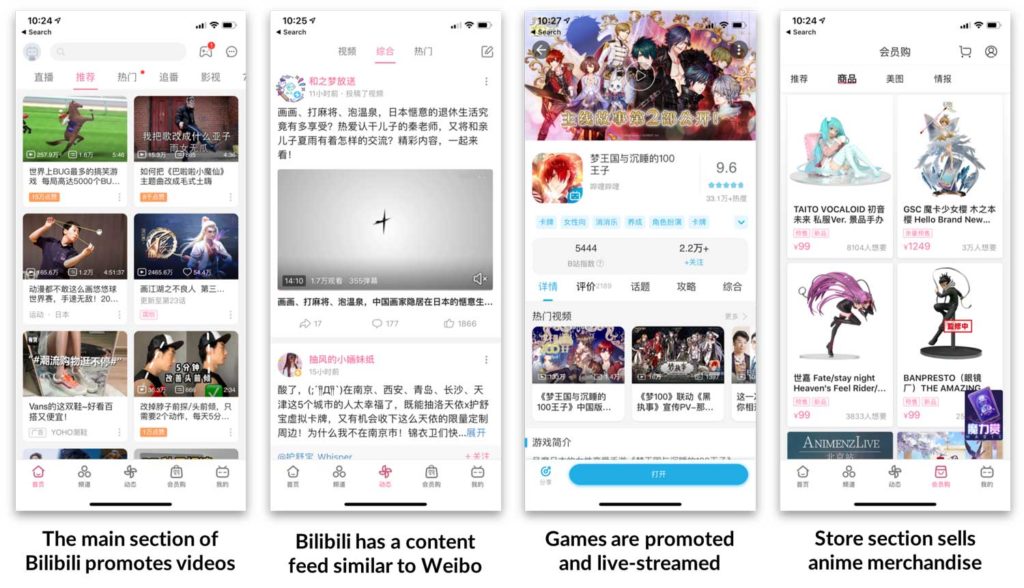 With Youtube being blocked by the great firewall of China, BiliBili is one of the main alternatives for domestic users. And since Alibaba and Tencent are getting on-board, it may grow to the same scale they Youtube has grown in the West.

China’s online video market seems to be dominated by 3 companies: Youku (owned by Alibaba), iQiyi (owned by Baidu) and QQ Video (owned by Tencent). However, a third contender is worth a look from both users and sellers: the versatile and powerful platform Bilibili.

Bilibili started in 2009 as a website specializing in sharing anime photos and videos. Over the course of 10 years, the company expanded into a host of new categories, including advertising, mobile gaming and e-commerce.

Unlike other major video platforms such as iQiyi and Tencent video, Bilibili has a unique content positioning focused on ACG (anime, comics and games). In particular, Japanese anime, manga and video games. In Chinese, this type of content is called second dimension space (二次元). 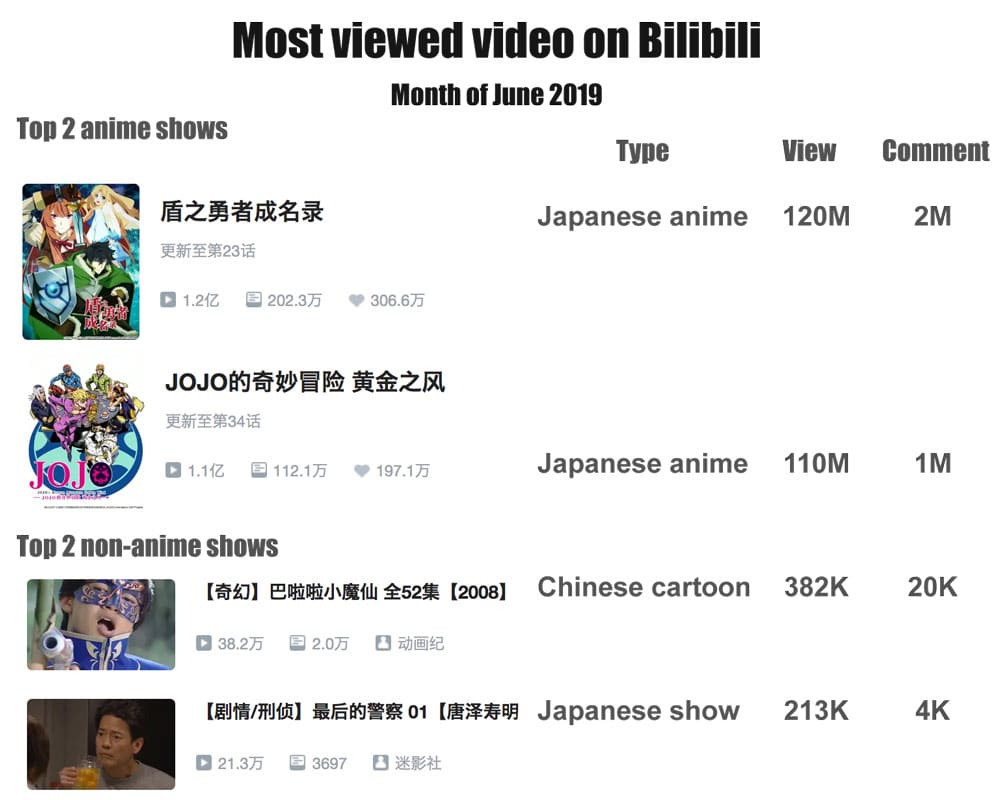 Judging by Bilibili’s most-watched programs, anime is clearly the most popular genre. Even among non-anime programs, the top program of the month is a children’s program.

This says a lot about the demographics of Bilibili’s users. The majority of users are students or young graduates. According to Bilibili’s Q1 2019 investor presentation, the focus is on Gen Z (people born from 1990 to 2009).

However, the company changed its positioning to target a broader audience including more popular TV shows since its IPO in March 2018.

Here are the top 5 videos ranked by the number of “danmus” (“Danmu” or 弹幕 refers to comments floating on the screen at a specific time during a show - they are one of Bilibili’s signature features):

According to Bibilibi’s Q1 2020 investor presentation, the category ranking by number of views in 2020 was:

Bilibili is known for its video commenting feature, Danmu (弹幕, directly translated to bullet screen commenting). Users can make a quick comment at a specific time during the video. The comments will fire from the side of the screen, covering the video content like bullets.

A popular video could receive thousands of Danmus. Imagine watching a movie while thousands of people are commenting on the video at the same time. It could get frantic for some users.

Many of the comments may seem very repetitive, as if users are looking for more social confirmation. But sometimes Danmu can be interesting when users post good sarcastic comments.

Since Danmus is spontaneous, it is a place where viewers can socialize with other viewers. A good comment could even become popular Internet slang.

Bilibili has seen strong revenue growth in the past year, from RMB 0.8 billion to RMB 1.4 billion (a 58% growth rate for young people).

Although the company is not profitable, it has managed to reduce its net loss in the last 2 quarters to RMB 195.6 million.

Bilibili’s content cost was RMB175.8 million in Q1 2019, representing 15% of cost of revenue. This is the cost of purchasing licensed content from copyright owners and content distributors (and does not include revenue sharing for user-generated content, which we will discuss later in this article).

For iQiyi, a mainstream video platform operated by Baidu, the cost of content was RMB 5.3 billion: 73% of the total cost of revenue. The reason is mainly that iQiyi, like Netflix, constantly invests in creating original shows. It has launched successful shows such as Produce 101, Story of Yanxi Palace, Daomu Biji, U can u bibi.

Bilibili is very different in its approach to content. Unlike iQiyi which focuses on buying licenses and creating original content, Bilibili has a strong revenue sharing program to encourage users to upload their own content.

This makes Bilibili one of the highest paying platforms for content creators in China. Revenue sharing cost Bilibili RMB 551.7 million in the first quarter of 2019, accounting for 40% of revenue and 47% of the cost of revenue.

According to blogger KatandSid, who posted content on Bilibili, Toutiao, WeChat, Youtube, Weibo, and iQiyi. Based on data from the last 3 years, here is the revenue breakdown on each platform per 10k views:

Although Bilibili provides a strong incentive to content creators, it hardly compares to Youtube. Platforms like Weibo do not even provide a revenue sharing program. That’s why content creators have to rely on ads to generate revenue. This could ultimately affect the quality of content and user experience.

How does Bilibili make money?

Bilibili makes money primarily from the games it publishes and promotes through its platform. Mobile games account for almost two-thirds (64%) of Bilibili’s revenue.

However, there was a clear shift in Bilibili’s revenue sources: e-commerce increased from 2% to 7% of revenue in one year, while mobile games decreased from 79% to 64% of its revenue.

In fact, the anime industry has been consolidating over the past 2 years. Bilibili’s largest competitor, Acfun, was acquired by Kuaishou for a valuation of RMB 1.04 billion ($162 million) in June 2018. It was valued at RMB1.85 billion at the end of 2016, almost double the final acquisition price.

Bilibili is trying to make up for the content shortage by promoting Chinese anime content. But as of today, the quality gap remains too large to attract a significant number of viewers.

Short-form video platforms such as Douyin and Kuaishou are also eating into the market for user-generated content.

Bilibili distinguishes itself from other video platforms by its unique positioning of anime-focused content and its strong revenue sharing program.

Bilibili is unlikely to be able to compete with Tencent, Baidu or Alibaba in the video content space. BAT companies are dominating the online video space through QQ Video, iQiyi and Youku.

To remain competitive, Bilibili will have to innovate and focus more on content generation, rather than relying on imported content from Japan. Its versatile position at the intersection of gaming, anime and e-commerce could help Bilibili stand out from the crowd.

Y Combinator and 500 Startups, the best accelerators for startups
Jeff Bezos will no longer be the CEO of Amazon